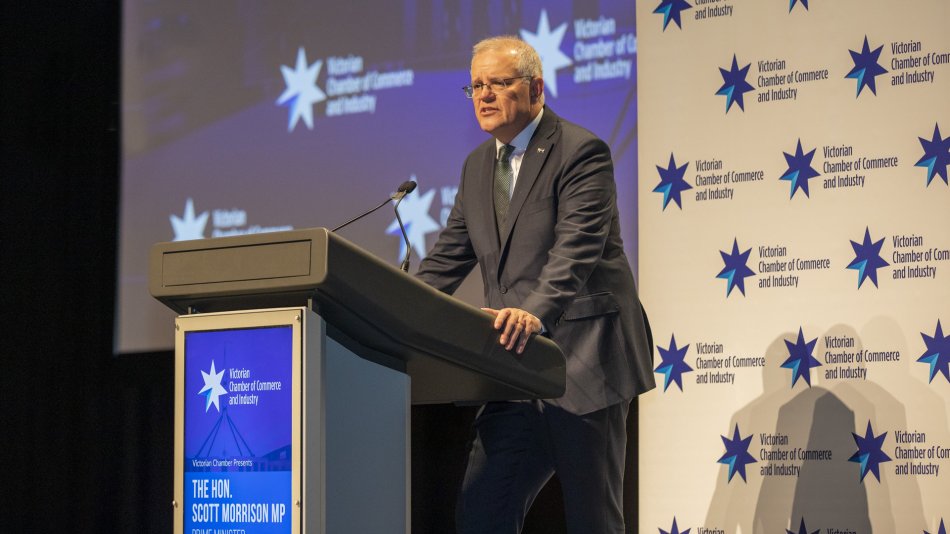 The Victorian Chamber was proud to host the Prime Minister of Australia, The Hon. Scott Morrison MP, at a breakfast with our members and special guests, where he outlined how his government plans to support the private sector’s solutions to climate change.

Victorian business can be at the forefront of the private sector’s technology-led climate change intervention, The Hon. Scott Morrison MP told the 450-strong audience at the Melbourne Convention and Exhibition Centre.

Fresh from a recent tour including the Glasgow COP26 summit, the Prime Minister emphasised businesses’ role in advancing the nation’s prosperity and sustainability in a post-pandemic world.

‘Can-do capitalism not don’t-do government’ was the key message, with his speech outlining his recent government funding announcement for climate projects while also covering broader topics of Victoria’s emergence from lockdowns and post-pandemic economic recovery. 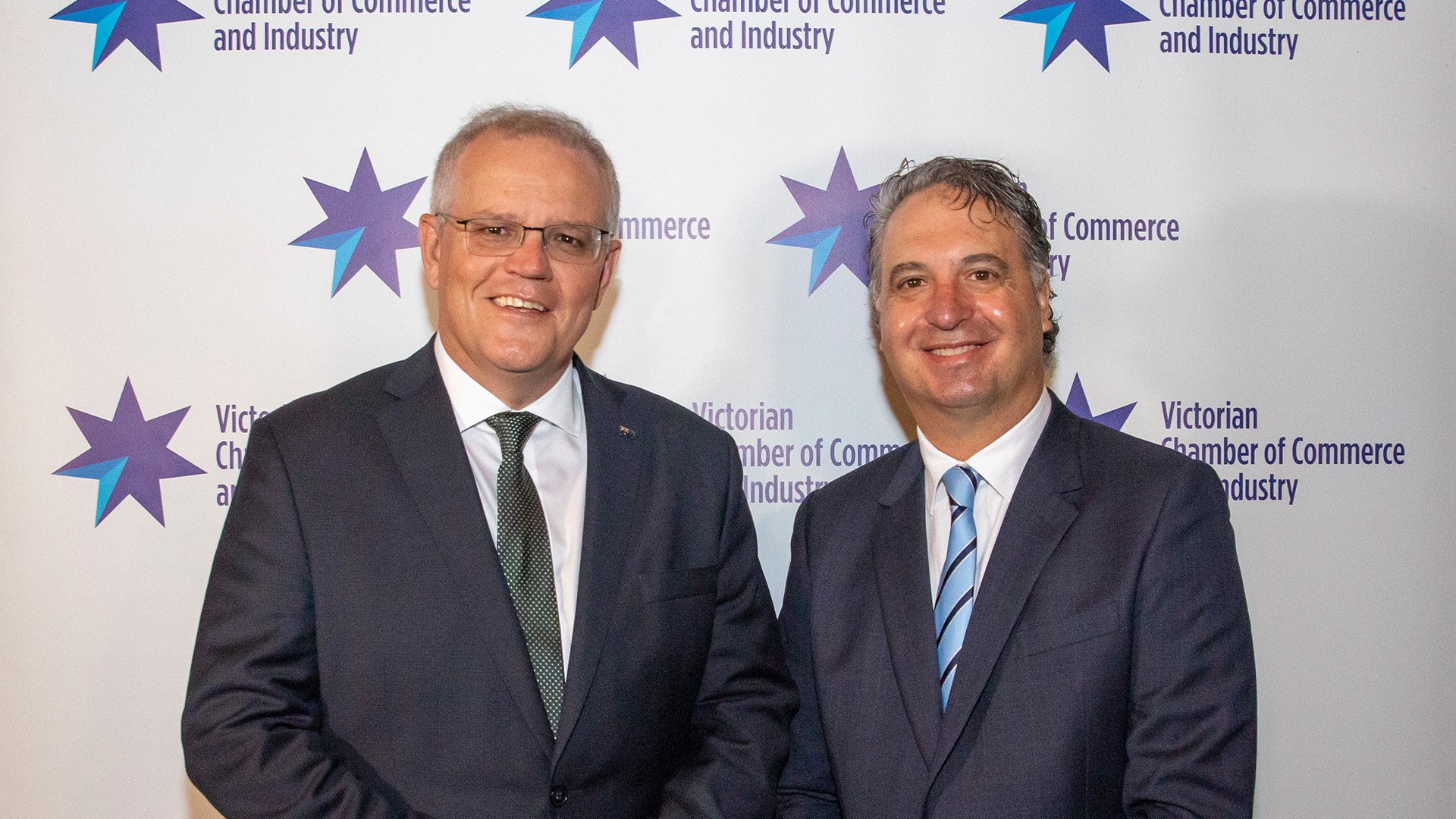 This event represented the post-lockdown vaccinated economy in full action; the first major business event in Victoria since restrictions were eased.

The Prime Minister lauded the sights of Melbourne “roaring back” from the pandemic, evoking the “human face” of city life returning, business serving customers again, hugs at the airport and, fittingly, people getting a haircut.

“We want to see more of the economy back here,” he said of Victoria’s contribution to Australia’s prosperity, thanking the small and medium Victorian businesses that had “done the hard yards” during the pandemic.

“You're the ones who've managed the heartache, complexity and frustration of extreme lockdowns and restrictions and staying COVID safe. And you are the ones who are now opening your doors again,” Mr Morrison said.

In his speech, the Prime Minister painted a picture of optimism with business confidence returning, quoting the RBA projecting economic growth of 5.5 per cent by 2022 and unemployment rate forecast to drop to four per cent by 2023.

Australia must remain safely open and not go back as it experiences one of the lowest fatality rates from COVID-19, one of the highest vaccination rates and one of the strongest economic performances in the world.

The next step involves “restoring our livelihoods and guaranteeing the essentials of all Australians – health, security, jobs, freedoms”.

“Economic management matters more now than ever before.”

The Prime Minister said he was confident that enterprise and the right policy settings will continue to secure Australia’s recovery and future.

Given Mr Morrison’s recent visits to Rome for the G20 and Glasgow for the COP2 summits, it was no surprise climate change, “one of the single largest economic challenges our country will face in the decades ahead”, occupied much of his speech to Victorian Chamber members and special guests.

The Prime Minister was adamant, however, that “Australia is doing our part” to reach net zero by 2050, reducing emissions by more than 20 per cent – a rate greater than the US, Japan, NZ, Canada and South Korea.

“I’m not sure many Australians know that,” he added.

The Prime Minister added that emissions intensity has fallen since 2005 by 54 per cent, second of all G20 countries to the UK, while our economy has grown by 45 per cent, “proving that emission reduction need not come at the expense of economic growth”.

“At the same time, we developed one of world’s biggest LNG industries.”

Emissions may fall more by 35 per cent by 2030, the Prime Minister forecast.

“This is happening because Australians are making their own choices in this area – not being told what to do by governments or bureaucrats.”

One particular choice is around solar power, with Australia boasting three million solar rooftops, representing more than one in four houses and non-residential buildings, and 2,000 new small solar installations every business day.

The recent climate summits “reinforced my core beliefs about how we as a free, open and enterprising society should approach these challenges”, Mr Morrison added.

“No one passed a law, introduced a tax or resolution at the United Nations that led to the world developing a COVID vaccine.

“Just as the animal spirits of enterprise have worked together with scientists and technologists to change the world in the past, and we see that right in this city, through advances in medical science and digital technology, I am more than convinced they hold the answer to solving the challenge of a decarbonised economy.

“We believe climate can be ultimately solved by ‘can-do capitalism’ not ‘don’t do governments’ seeking to control peoples’ lives.”

The Prime Minister accepted the issue of responding to climate change was no longer about if, why or when, but the “very practical question of how”.

“The world does not need to be punished for climate change, we just need to fix it.” How Australia will respond to climate change will largely be determined by business, with great opportunity in Victoria to drive that progress, Mr Morrison said.

“It will be fixed painstakingly, step-by-step, by the entrepreneurs, the scientists, the technologists, the innovators, the industrialists, the financiers, the risk takers.”

However, Australia must chart its own “unique” path, due to its geography, demography, resource endowments and export profile, much of which is heavily reliant on rural and regional Australia.

Mr Morrison explained his belief “evolution not revolution is the path to net zero”, with Australia to oppose prescriptive deadlines for phasing out particular fuels and focus on producing and exporting world-class resources, energy, manufactured goods and agricultural products, led by our globally competitive companies.

To that end, the Government is also to establish a $1 billion Low Emissions Technology Commercialisation Fund within the Clean Energy Finance Corporation (CEFC), “injecting $500 million in new capital with the remaining $500 million to be sourced from private sector investors”.

“The Fund will address a gap in the Australian market, where currently small, complex, technology-focussed start-ups can be considered too risky to finance.”

A technology-driven approach to reducing emissions is playing out in Victoria, the Prime Minister said, citing the Latrobe Valley as an energy producing region.

“It is geologically suitable for producing hydrogen and storing carbon underground, while also being in close proximity to electricity and shipping infrastructure.

“These advantages underpin the Hydrogen Energy Supply Chain project, a world-first pilot project supported by the Australian, Japanese and Victorian Governments – a project designed to safely and efficiently produce and transport clean hydrogen from the region.”

He also points to the Modern Manufacturing Initiative (MMI) in helping transform manufacturing businesses scale up, translate ideas into commercial success and integrate into local and international supply chains.

With $2.3 million in funding, Victorian Chamber member Titomic is working to commercialise the manufacture of space vehicle parts using green titanium for Australia's growing space sector and for overseas export.

More immediately, a question from the floor identified the growing skills shortage as a key current challenge for business.

“We want to get them back [skilled migrants] as soon as possible,” Mr Morrison said, pointing to moves on Singapore, Korea and Japan opening up even sooner.

“We’ve just got to get through the next couple of weeks.

“Australians have been through a lot. They don’t want see us get the wobbles now in safely opening up.

“I commend both Victorian and NSW governments on what they have done in abolishing quarantine for those coming from overseas.

“Vaccination was the key part of the answer.

“I think we will see that [skilled migration] here in Victoria and NSW very soon, including international students.

“Both states have been planning on impact on hospitals for many months. Plans are working. That should encourage other states to move on once we reach vaccination targets.” 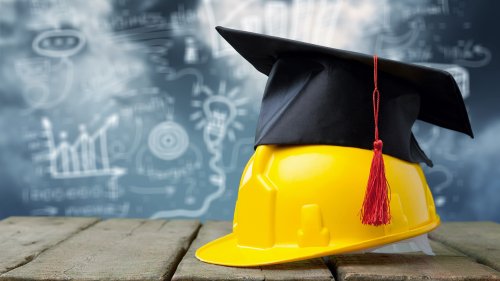 As Victoria emerges from COVID-19 and business confidence returns, there has never been a better time to take on an apprentice or trainee - a crucial pathway to kickstart our economy post-pandemic and secure talent for Victoria’s future workforce. 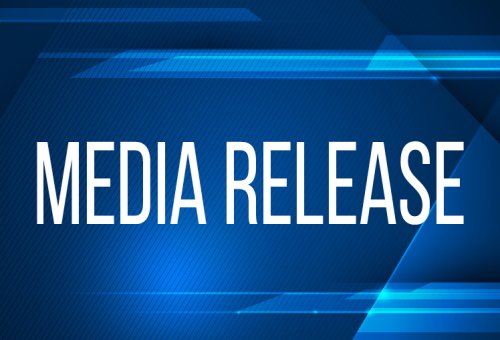 $2.27 billion in further business support to help businesses and workers

The Victorian Chamber welcomes the announcement of a fifth allotment of joint Federal and State Government funding to see business and workers through until vaccination rates hit the targets we need to open up under the Roadmap to Deliver the National Plan. The State and Federal Governments have announced a further $2.27 billion in grants and financial support to assist Victorian businesses and workers struggling through the final weeks of lockdown. 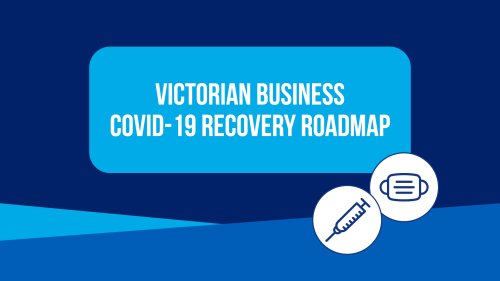 Victorian business needs certainty and clarity on the plan for our state’s COVID-19 recovery. The Victorian Chamber has formulated a detailed four-phase roadmap to provide that light on the hill for business, workers, the economy and communities.

Victorian business needs certainty and clarity about when they can plan to welcome back customers and staff as we progress towards hitting the National Cabinet’s COVID-19 vaccination targets of 70 and 80 per cent.

Continued financial support to help Victorians get through lockdown

The Victorian Chamber welcomes the further $2.34 billion in joint State and Federal Government support announced today for Victorian businesses and workers to get through the continued extension of Lockdown Six. 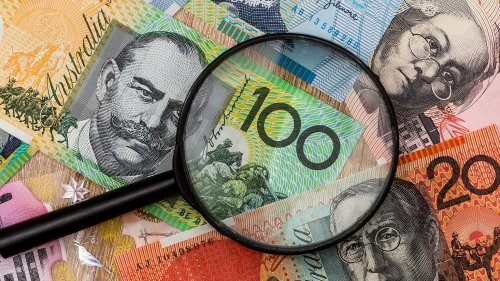 The seven most sought-after grants and support programs

Since the launch of the Victorian Chamber’s Grant Finder tool, hundreds of Victorian businesses have already searched for the support they need – and found it. Don’t miss out!

The Victorian Chamber is pleased that the State and Federal Governments have again come together to announce a further $807 million in support for Victorian businesses to get through the second extension of Lockdown Six. 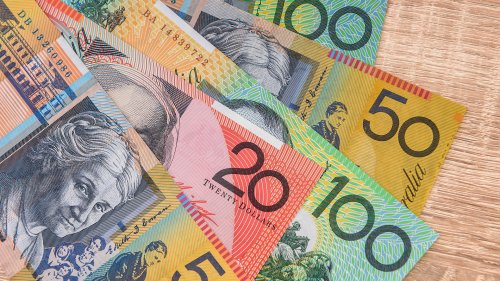 The State and Federal Governments have jointly announced a further $2.32 billion in financial support for Victorian businesses struggling during Lockdown Six.

The Victorian Chamber is pleased by today’s announcement of a further $367 million in business support as a result of another joint effort by the State and Federal Governments to help businesses stay afloat during the extended Lockdown Six period. 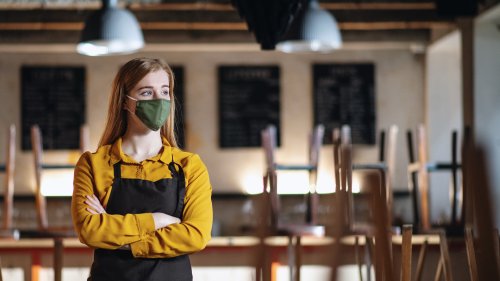 The Federal and State Governments have jointly announced an additional $367 million in financial support payments - primarily targeted towards Metropolitan businesses in lockdown.

The Victorian Chamber welcomes today’s prompt announcement of a new $400 million State and Federal Government support package, which will give businesses the confidence they need to get through Lockdown Six and continue the recovery from Lockdowns Four and Five.

Want to grow your business, seek HR advice, up-skill your staff or need assistance navigating COVID-19 requirements? Become a member today to access a great range of member benefits to support your business.